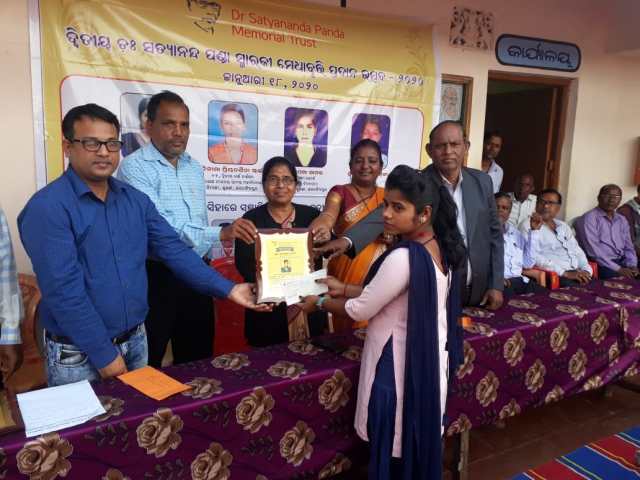 Paradip: Meritorious students have been awarded scholarship by Dr Satyananda Panda Memorial Trust, formed in memory of the noted educationist, social worker and writer of Jagatsinghpur district. On the occasion of his second death anniversary, a small function was held at Janata Nodal School established by him in his native village Jhimani under Kujang block.Organsied under the chairmanship of Mayadhar Das, former Head Master of the school, present Headmistress of the School Kalpana Das, Dr Banaprabha Parida, Principal of Narayan Birabar Samant College, established with the support of Dr Panda in his village, the meeting was attended by many dignitaries from the area. The guests remembered him while paying floral tribute at the statue of Dr Panda and gave away awards to the meritorious students.

Nirupama Swain, studying plus two scince in Ravenshaw Junior College after passing out from Janata Bidyapitha Jhimani, Subrat Lenka of the school who is presently studying plus two in JKBK College, Cuttack, Annapurna Raut, studying plus two Arts and Nilima Priyadarshini studying Commerce in Naryan Birabara Samant College were awarded scholarship by the guests.

Besides staff and students of both the institutions, other dignitaries, Subhransu Panda, Managing Trustee and Prakash Panda, Trustee of the Trust paid homage to Dr Panda. Last year too 5 meritorious students of both the institutes were awarded scholarship by the Trust. Dr. Panda, the first PhD holder of the state in Anthropology to have done research on fishermen community, had given up his career as a university teacher and worked with the displaced, land losers, in the industrial belt of Paradip and was associated with many such organisations. A gifted scholar, he had edited more than 10 magazines, and written articles in many journals and a book History of Paradip. He passed away on January 5, 2018 after a massive heart attack.